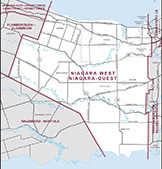 Boundaries description:
Consisting of that part of the Regional Municipality of Niagara comprised of:

The Constitution of Canada requires that federal electoral districts be reviewed after each decennial (10-year) census to reflect changes and movements in Canada’s population. The current federal redistribution process began in October 2021.  It is led by independent commissions working separately in each province to establish electoral boundaries. The Chief Electoral Officer is tasked with applying the representation formula found in the Constitution to determine the new allocation of seats. Elections Canada is also responsible for providing administrative and  technical support to the commissions.

On June 23, 2022 , Parliament amended the Representation Formula, which determines the   number of Members of Parliament (MPs) to be assigned to each province. The new legislation ensures that every province retains, as a minimum, the same number of MPs that it had assigned during the 43rd Parliament elected in 2019.

Using the new formula, the Chief Electoral Officer has recalculated how many MPs each province will be assigned. As a result of this process, Elections Canada has recommended changes to (Most) of the electoral boundaries in Canada.

In the case of Niagara West,  there has been a recommendation that the boundaries change by eliminating Grimsby (below the escarpment to the lake), from Durham Road to the Stoney Creek Boundary. This portion of Grimsby would become part of a re-aligned (new) riding along with the northern portion of Stoney Creek as well as a small part of Hamilton and be called: Hamilton-Stoney Creek-Grimsby Lakeshore.

In addition to this change, Niagara West would see an additional of part of St. Catharines West, a large portion of Thorold, and Dunnville.

Currently, public hearings are underway to hear from citizens and members of Parliament as to objections  regarding the changes. (See link for more details). Once the commission have concluded hearings, they will review objections between January and June of 2023 and render a final decision in September of 2023.

Dean has heard from many citizens, specifically concerned about the removal of part of Grimsby from Niagara West.

Below is a letter of concern that was sent  to Federal Electoral  Boundaries Commission  for Ontario. In addition to this correspondence, participation at hearings and additional conversations will continue.

I write to you today on behalf of a great number of constituents of Niagara West, and specifically resident of Grimsby, Ontario.

The proposed changes to the boundaries of Niagara West, while many may have validity when considering population – one of the major changes that should be reconsidered is removing the portion of the Town of Grimsby located north of the Niagara Escarpment (Ridge Road) and west of Durham Road (Grimsby and Town of Lincoln border).

Specifically, to remove this large portion of Grimsby and attach it to the new riding of Hamilton/Stoney Creek/Grimsby Lakeshore, in relation to geographics, demographics and most importantly the psychographics of Grimsby residents is counter intuitive. The town of Grimsby is part of the Niagara Region. The residents of this area have voiced their concern that they identify with living, working and commuting with other towns in the Niagara Region and do not want to be identified as part of the Hamilton CMA. The overall governance and economic importance of this area is much more akin to the Niagara Region than to Hamilton.

As an example, The West Lincoln Memorial Hospital, the YMCA and the new West Niagara High School, all located in Grimsby serve the residents of Grimsby, Lincoln and West Lincoln and have no connection to resident of Stoney Creek or Hamilton.